Hampton Avenue is privileged to have been nominated for three songs in the Best Song Awards category for the Just Plain Folks Music Awards, taking place Saturday, November 4th in Santa Ana, CA. (Near Disneyland).  Here's a link to ticket info and the schedule:  Just Plain Folks Ticket information
Just Plain Folks  had 25,500+ albums and 350,000+ songs entered for the awards this year, and recently announced nominees in 81 album and 67 song categories.  This year's nominees come from over 70 countries around the world and include seasoned well known veterans and some of the best up and coming artists and writers in the music community.  They spent 13 months screening all the music 1 song at a time and
chose three songs from the Hampton Avenue recording repertoire to be eligible for a Just Plain Folks Music Award.

Nominated for best Holiday Song is:
Angel's Lullaby -- written by Judy Tate, and arranged for Hampton Avenue by Debbie Fleming

The Just Plain Folks Music Awards are  the largest and most diverse music awards of any kind in the world.  If you'd like to read a great article on the last awards show/process, here's a link to an Article from Singer Magazine that summarizes what it's all about very well: http://www.jpfolks.com/AwardsArticle.pdf 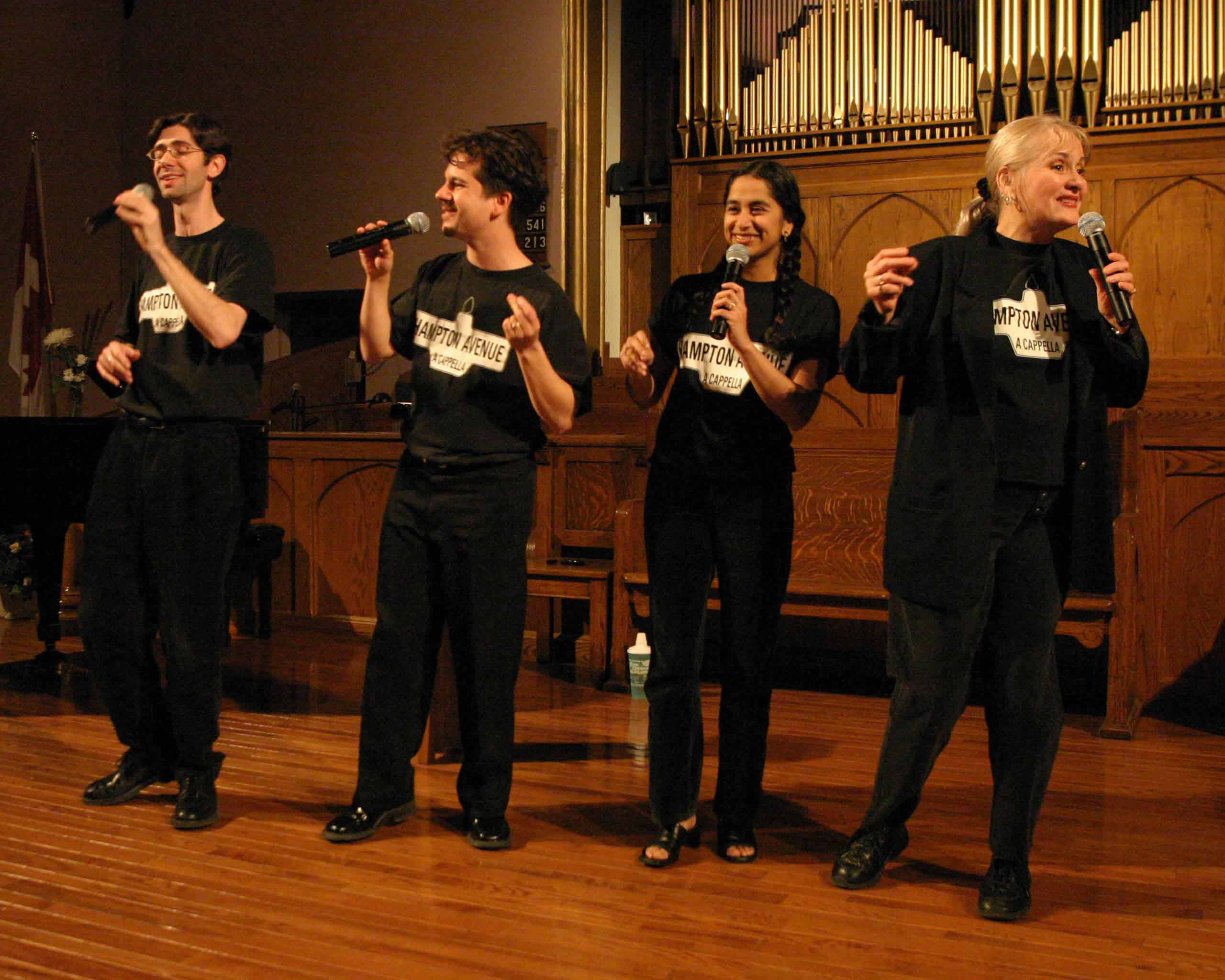 To begin the 2004 Holiday season, Hampton Avenue-4 presented an evening of music, adding their lush harmonies and arrangements to popular and original holiday tunes.  This provided longtime Hampton Avenue fans with the annual "tradition" begun by the larger group, of launching into the holiday season with fun, and exquisite treatments of favourites such as "All I Want For Christmas",  "Glory Halleluiah","Have Yourself a Merry Little Christmas" and many more.  Hopefully, the group will appear at Hugh's Room (a fantastic performance venue) for the 2005 Holiday Season.  Keep tuned!

Hampton Avenue-4 returned to spiffy First Canadian Place once again this year , to provide their wonderful carolling to the shoppers walking by.  Dressed in their  flashy tuxes with seasonal red bowties,the singers alternated between singing traditional carols, and finger-snapping jazzy Hampton Avenue originals.  Shoppers and passersby often stopped, listened and smiled as they enjoyed the infectious seasonal good cheer that the Hamptons offered.  On December 23rd, they entertained a long lineup  of people waiting to enter the Liquor Store to stock up on Christmas beverages.  It was like busking for a lineup at Ticket Master - quite fun for all of us!

Hampton Avenue-4 performed for a capacity audience in Barrie Ontario for the prestigious Colours of Music Festival, which is an annual event.  In the morning, they did a workshop for a Barrie High School, where Dylan Bell taught the students how to produce some rocking vocal percussion.  A  newspaper review of the Hampton Avenue-4 performance was written by Sharon Fitzsimmins:

Jazzing It Up at Music Fest

"everyone left with a dance in his or her step due to an evening with the Hampton Avenue 4."

Hampton Avenue 4, an a cappella quartet from Toronto added a jazz flavour to this year's Colours of Music Festival.  Music from the jazz era, tunes of the "'80's" along with original compositions by the group's director, Debbie Fleming, made for a mellow evening.

Throughout the performance, the vocalists demonstrated their vocal technique and fine-tuning.  At times, even though you knew there were only four people on stage, it seemed a jazz band was accompanying them.  Much of the credit for these instrumental sounds goes to the bass, Tom Lillington, who for most of the time was the "backup band."

However, the other members did have their chance to produce the Latin instrument sounds along with the muted brass in Cuban Night.  Earlier in the day, Hampton Avenue 4 performed at a school concert and taught over 200 students how to make these vocal sounds.

In the group's rendition of True Colours, arranged by tenor Dylan Bell, the tight harmony and vocal flexibility was outstanding.  All four had solo features throughout the eveing and Suba Sankaran shone in "It's All Right", a song that she arranged.

A unique thing about this group is that most of the arrangements are their own.  This necessitates that the audience be open to these new sounds and appreciate the creativitiy and artistry required to realize them.

The concert concluded with a three-minute summary of jazz in Fleming's "Let's Jive" andthe popular "Everybody's Boppin'".  Certainly, everyone left with a dance in his or her step due to an evening with the Hampton Avenue 4.

On Good Friday, Hampton Avenue 4 performed a lovely evening of song in Port Perry.  Lynn McDonald, the talented presenter, sang a few tunes with warmup pianist George Gallus.  Ms. McDonald is a selfless devotee to good jazz music, and presents many other wonderful artists on a regular basis in the picturesque town of Port Perry, both at the church, and at the Church at Sonya, just a few kms. north of Port Perry.